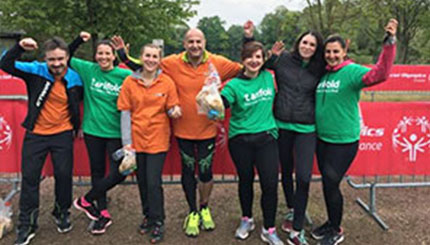 Tarifold was present alongside the association Special Olympics during the race in Lingolsheim with two teams to support an important cause: the self-fulfillment of people who live with a mental handicap through sport.

More than a race, it is solidarity against the handicaps that affect some of us … It is the possibility to rub shoulders through sport and effort, to watch the other as equal to equal. Feeling supported by people defined as different in a friendly atmosphere, while seeking to excel and exceed oneself.

Christophe Bezy, sales manager, who opened the race for the men’s team.

In France, Special Olympics works with a network of partners to offer children, adolescents and adults the opportunity to experience the joy of sport. 15 solidarity races are organized every year with over 4000 runners involved. All benefits from the race have been donated to the Special Olympics Association France to offer each year nearly 150 sport events for more than 20,000 people with mental disabilities.

The race was held on April 27 at the Lingolsheim fitness trail. Two Tarifold teams have accepted the challenge: a women’s and a men’s team ran in a 4 x 2.7 km relay. The company’s employees who travelled to Lingolsheim from all around the world (France, Germany, Spain, Greece, Russia, etc.) promised to participate in the race again next year to support this important cause. 120 runners, in 29 teams participated to the race and represented 10 companies. Special Olympics was able to collect 20 800 €.

The important thing is to participate! Tarifold has again this year endorsed this motto by encouraging its employees to take part in this race in favor of childhood. This participation is consistent with Pasteurdon, actions for the autism research, also supported by our company for many years. They are both part of the Sustainable Development policy and social actions Tarifold is developing for years, which, although is by vocation a place of work and wealth creation, is not less a place of humanism putting human values in the midst of our concerns.

Yves Revenu, President of the company